Grapevine (Vitis vinifera) is one of the most ancient crops cultivated worldwide for the production of both fresh grapes and wine, which represents an important source of income for many countries. Europe is the leading global wine producer, with about 50% of the world’s vine-growing area, with 3.3 million ha (Food and Agriculture Organization of the United Nations Statistics Division, FAOSTAT, 2018). Grapevine can be affected by virus and virus-like diseases that may significantly reduce the productive life of the plants as well as the grape production in terms of the quantity and quality of the berries [1]. In fact, the grapevine has been described as the crop that hosts the largest number of plant viruses, with more than 85 viral species known to infect this important crop to date [2,3].

In a four-year (2009–2013) survey, conducted on sweet cherry (Prunus avium) orchards in Imathia region in Northern Greece for the presence of Betaflexiviridae viruses [4], a sample was collected from a symptomless sweet cherry tree (cv. Ferrovia, coded ‘c18′). The sample was subjected to high throughput sequencing (HTS) analysis, which revealed among other known sweet cherry viral pathogens the presence of a putative new ilarvirus species. Based on the HTS data and further Sanger sequencing analysis the complete genome of the novel ilarvirus species was determined for which the putative name ‘prunus virus I (PrVI)’ is proposed. Phylogenetic relationships and sequence comparison with other characterized ilarviruses support the designation of PrVI as a novel species in the genus Ilarvirus. Preliminary surveys in Imathia region were also conducted, in order to investigate the incidence of PrVI in Prunus orchards.

A total of 14,001,093 reads were obtained after trimming and quality control of the sequences. A host genome subtraction was deployed using the Prunus avium scaffolds, resulting in 3,987,365 reads. The de novo assembly with Trinity’ (v.2.2.0) [5] produced 32,050 contigs, ranging from 201–14,021 nt in length. Subsequent BLASTn/BLASTx analysis of the obtained contigs revealed the presence of sequences corresponding to cherry virus A, prunus virus F, little cherry virus 1, cherry necrotic rusty mottle virus, and the recently discovered cherry virus Turkey [4]. Moreover, 7 contigs, ranging from 729 to 2902 nts (Figure 1, red lines), shared nucleotide similarities with genomic sequences of members of the genus Ilarvirus (query coverage, 82.6–100%, average identity, 73.4%). Iterative mapping of the reads to the assembled contigs (Supplementary Figure S1) was applied in an attempt to obtain the complete nucleotide sequences from all three segments. Nevertheless, in silico analysis could neither retrieve the untranslated regions (UTRs) of PrVI, nor a small sequence gap in the 5′ terminal of RNA1 (Supplementary Figure S1). For this reason, the complete genome sequence of PrVI was confirmed by Sanger sequencing and Rapid amplification of cDNA ends (RACE). 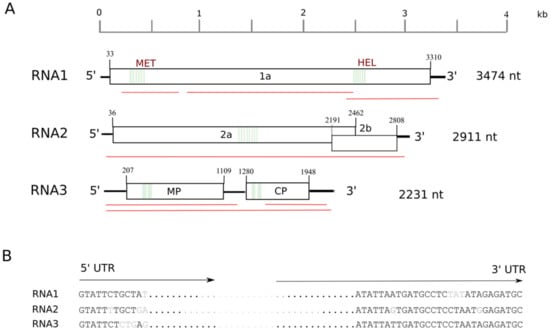 2.2. Genome Structure and Encoded Proteins of the New Ilarvirus

Figure 3. Multiple alignment of the 5′ and 3′ terminal nucleotide sequences of PrVI and other subgroup 1 ilarviruses. Conserved nucleotides are highlighted in bold.

Nucleotide and amino acid comparisons of the new ilarvirus’ ORFs with their cognates of other ilarviruses are illustrated in Supplementary Table S1. The complete nucleotide sequences of all RNA segments share 68.1–71.9% identity with SNSV (accession numbers NC_008706-8) and 66.4–71.6% identity with BCRV (accession numbers KX834010-12). Maximun-likelihood trees based on the aa alignments of the replicase (1a), RdRp (2a), MP and CP proteins of 22 ilarviruses showed that the virus is clustered in all cases in subgroup 1 with TSV, PMoV, SNSV, and BCRV (Figure 4).

The genus Ilarvirus (family Bromoviridae) is composed of 22 permanent virus species, according to the ICTV taxonomy, whilst five tentative ilarviruses await official ICTV designations [6]. From a phylogenetic point of view, ilarviruses are classified into four major subgroups: 1, 2, 3, and 4, whereas APLPV and humulus japonicus latent virus show no close relationships to the other subgroups [1]. Nevertheless, all the members of the genus share a few common features in their genome organization. The RNA1 is monocistronic, coding for their viral replicase (1a) and featuring a MET and a HEL domain. In subgroup 1 and subgroup 2 ilarviruses, RNA2 is bicistronic; apart from the viral polymerase (2a), they may encode a smaller protein (2b), through subgenomic RNA [1]. Finally, RNA3 codes for the MP (proximal ORF) and the CP (distal ORF).
In this study, we characterized the complete nucleotide sequence of a novel ilarvirus from a sweet cherry tree, collected from Imathia region. Collective data from in silico analysis revealed that PrVI shares a similar genome organization with ilarviruses and harbors several motifs that are typical of the majority of members in the genus or even in the Bromoviridae family. Phylogenetically, PrVI is closely related to SNSV, BCRV, TSV, PMoV, privet ringspot virus, and ageratum latent virus, all members of the subgroup 1 of ilarviruses (Figure 4). Therefore, PrVI consists the first ilarvirus from subgroup 1 that infects Prunus spp.
Furthermore, PrVI UTRs showed high nucleotide similarities with those of their cognate ilarviruses from subgroup I. A series of studies have shown that alfalfa mosaic virus (AMV) and ilarviruses require the interaction of their own CP with the 3′UTRs of their viral RNAs to initiate replication and establish infection [7,8] and this function was termed “genome activation” [9]. Interestingly, a highly conserved R residue located in the CP of AMV, citrus variegation virus and TSV, which is also present in PrVI (Figure 3) and two R residues in PNRSV, were shown to be crucial for this phenomenon to occur [10,11]. Altogether, the conserved nature of these residues in the CP of AMV and ilarviruses along with the nucleotide conservation in their 3′UTRs could facilitate this process.
A small-scale survey was conducted in Imathia region, which consists a major area of stone fruit tree cultivation in Greece. The purpose of this survey was to investigate the presence of PrVI in sweet cherry and other stone fruit trees. In this context, in 2019–2020, we collected samples from sweet cherry, peach and plum orchards as so to identify potentially hosts for PrVI and we used plant material from 2009, 2013–2014 from the collection of the Plant Pathology Lab (AUTH). PrVI was identified in a low incidence of 3.6% (4/138) in sweet cherries. Notably, PrVI was also detected in one peach sample. Nonetheless, further experimental data are needed to address whether peach consists another host for PrVI and, possibly, plum, as we only tested a small number of plum samples. Moreover, the virus was identified in samples collected during 2009, 2014 and 2019 thus indicating that PrVI is infecting trees in the area for over a decade.
It is worth mentioning that the Prunus samples that were found positive to PrVI, did not exhibit any obvious symptoms of viral infection. As fulfilling Koch’s postulates faces several limitations [12,13], especially in the case of viruses infecting perennial hosts, the implementation of alternative strategies to associate viruses with putative disease development, such as the simplified hierarchical approach proposed by Fox [12], could provide a wealth of information on PrVI pathogenicity and this topic awaits future research.

Total RNA was extracted from leaves of the sweet cherry sample c18 using the TRIzol reagent (Invitrogen, Carlsbad, CA, USA) and it was subjected to HTS analysis on an Illumina Hi-seq 4000 platform (Novogene Co., Tianjin, China). Paired-end reads were trimmed using PrinSeq and quality was checked with FastQC (Babraham Bioinformatics, Cambridge, UK). Prior to de novo assembly, the host genome sequences (https://plants.ensembl.org/Prunus_avium/Info/Index, accessed on 3 September 2020) were removed using the ‘Bowtie2′ mapper incorporated in Geneious Prime® 2019.1.1. (https://www.geneious.com, accessed on 3 September 2020). Then, reads were assembled into contigs using the de novo assembler ‘Trinity’ (v.2.2.0) [14] with default parameter settings. BLASTn/BLASTx analysis of the contigs were performed against local and online databases. Iterative mapping of the reads to the assembled contigs was applied with ‘Bowtie2′ implemented in Geneious Prime® 2019.1.1.

In order to validate the correctness of the de novo assembly, Sanger sequencing of overlapping amplicons with virus-specific primers (Supplementary Table S2) and RACE assays were implemented on new total RNA extracts obtained from the infected tree. For 3′-RACE, a poly-A tail was added to the total RNA using Escherichia coli poly(A) polymerase (NEB, Ipswich, MA, USA) according to the manufacturer’s instructions. Then, the 3′ ends of the three RNA segments were determined via RT-PCR and nested PCR using virus-specific primers and an oligo(d)T primer with an anchor sequence (Supplementary Table S3). The 5′ ends of the viral genome were determined using the commercial ‘5′/3′ RACE Kit, 2nd Generation’ (Roche Diagnostics GmbH, Mannheim, Germany). All amplification products were directly sequenced at Genewiz (Leipzig, Germany) and sequences of overlapping fragments were assembled using the Geneious Prime® 2019.1.1.

Full-length viral genome sequences were submitted to ORF finder [15] to determine the genomic organization and the predicted amino acid (aa) sequences of the gene products. MAFFT v.7.450 was used as the multiple alignment program for nucleotide and amino acid sequences. For the phylogenetic comparisons of complete coding regions presented in all ilaviruses, i.e., 1a, 2a, MP, and CP, 22 established ilarvirus species were used. Maximum likelihood (ML) trees were constructed using MEGA 7 [16], applying appropriate, amino acid substitution models calculated by ModelTest-NG [17]. The reliability of the phylogenetic hypothesis was evaluated using nonparametric bootstrap analysis (NPB).

4.4. Mini-Scale Survey for the Presence of PrVI in Greek Orchards

A small-scale survey was conducted in 2019-2020 in Imathia region, with a view to investigate the presence of PrVI in Prunus spp., such as sweet cherry, peach and plum. Moreover, plant material was also used from the collection of the Laboratory of Plant Pathology (Aristotle University of Thessaloniki) from previous years, including Imathia and Arta counties (Table 1). A total of 138 samples were tested and processed to total RNA extraction according to a CTAB-based protocol described by Gambino and colleagues [18]. One-tube RT PCR was deployed using the primer set CP-F (5′-AACGATGCTATCACACTGAAGAC-3′)/CP-R (5′-CTCTGGTGGCAGCAAAGGC-3′) amplifying a 351 bp fragment of the CP gene. In detail, 1 μg of total RNA was used as a template in a reaction mixture containing 10mM Tris-HCl (pH 8.9), 50 mM KCl, 2.5 mM MgCl2, 0.2 mM each dNTP, 0.4 μM of the primer set CP-F/CP-R, 3 U MMLV (Invitrogen) 1.5 U GRS HotStart Taq DNA polymerase (GRiSP Research Solutions) and DEPC-treated water to a final volume of 25 μL. The cycling conditions were 45 °C for 30 min; 94 °C for 5 min, 40 cycles of 94 °C for 30 s, 57 °C for 30 s, and 72 °C for 20 s; and a final extension at 72 °C for 2 min. Amplicons derived from the RT-PCR assays were directly submitted for Sanger sequencing at Genewiz (Leipzig, Germany).

The following are available online at https://www.mdpi.com/2223-7747/10/3/514/s1, Table S1: Nucleotide and amino acid sequence identities between predicted proteins encoded from the genome of prunus virus I (PrVI) and their homologs from other ilarviruses; Table S2: Primers used for complete genome sequencing of PrVI from sweet cherry; Table S3: Primer sequences used for RACE; Figure S1: Iterative mapping of the reads to the assembled contigs corresponding to all three RNA segments of PrVI.

This study was partially funded by VirFree. This project has received funding from the European Union’s Horizon 2020 research and innovation programme under the Marie Skłodowska-Curie grant agreement No 734736. This publication reflects only the authors’ view. The Agency is not responsible for any use that may be made of the information it contains. Moreover, this research has been co-financed by the European Union and Greek national funds through the Operational Program Competitiveness, Entrepreneurship and Innovation, under the call RESEARCH—CREATE—INNOVATE (project code: T1EDK-05438).

The authors declare no conflict of interest. The funders had no role in the design of the study; in the collection, analyses, or interpretation of data; in the writing of the manuscript, or in the decision to publish the results.

VirFree (H2020-MSCA-RISE-2016-Virus free fruit nurseries) © All Rights Reserved | This project has received funding from the European Union’s Horizon 2020 research and innovation programme under the Marie Sklodowska-Curie grant agreement No 734736.